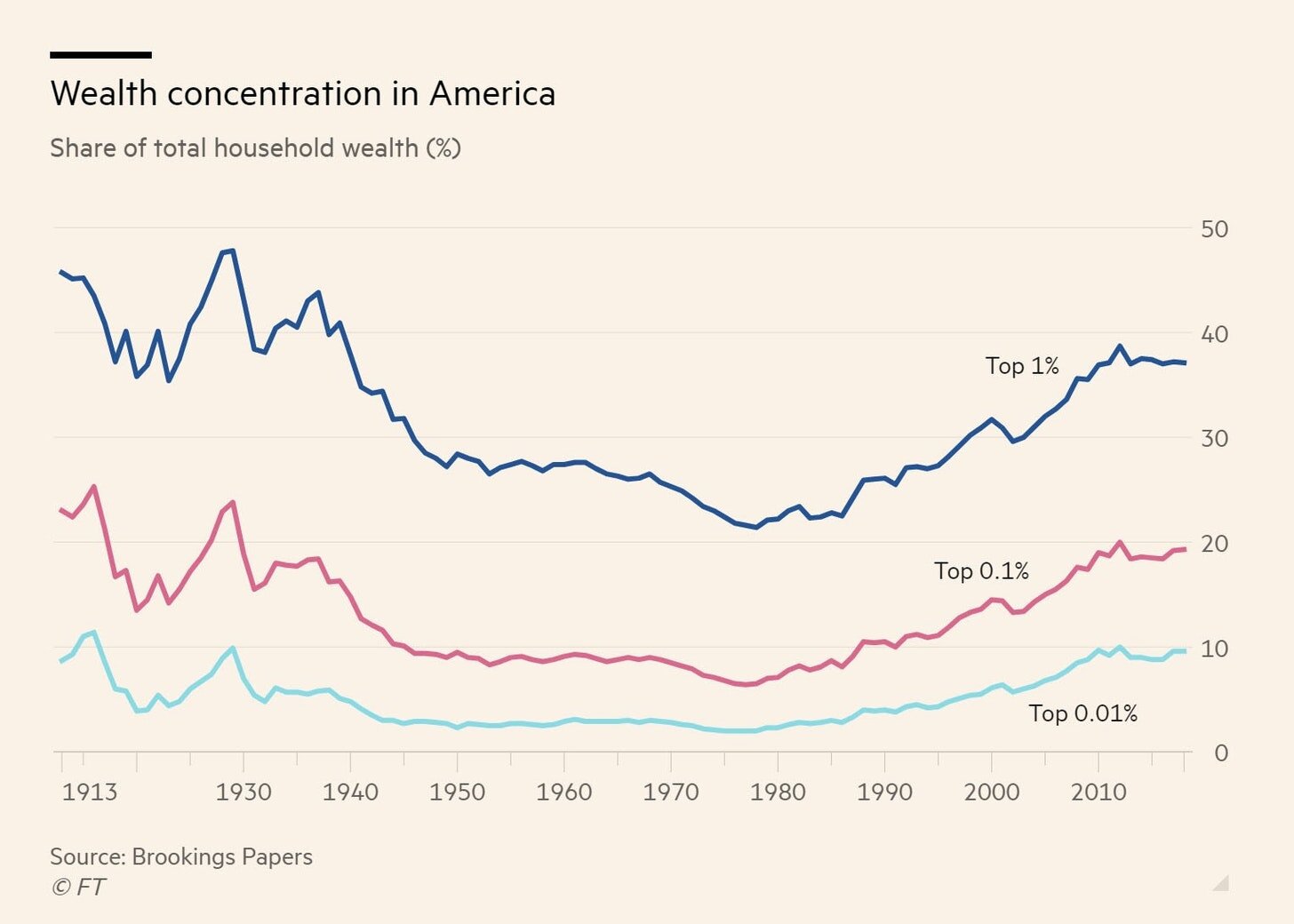 This doesn’t even include people who are homeless.

At the same time, we live in a time of untold prosperity. How can this be?

In the United States, the issues of poverty and inequality feel more present than ever. Perhaps it's the rising unemployment rate. (Personally, I think we should be talking about labor force participation more broadly, but that’s a topic for another day.) Maybe it's talking to friends about the looming presidential election. Whatever it is, domestic poverty and inequality have very much been on my mind.

Both issues are hard to ignore. Especially for those of us working in tech. With our generally stable and remote-friendly jobs, we are very, very lucky. I often ask myself when walking in the streets of San Francisco, Los Angeles, and San Diego: why do we tolerate such outcomes as a society?

Consider the hundreds of billions of dollars spent on welfare programs by our federal government alone. My hunch is that we could be using these resources more efficiently. One possible solution that Rutger Bregman explores in Utopia for Realists is universal basic income (UBI).

Though characterized in different ways, UBI is not that novel. Thomas More mentions it in Utopia in 1516. Thinkers like Friedrich Hayek, Milton Friedman, and a slew of politicians have wrangled with the idea for decades. People from across the political spectrum have seen UBI as a way to increase both agency and dignity. After all, both are the key pillars of any sensible policy to reduce poverty.

Every Democratic presidential candidate in this election cycle answered questions about how they planned to address these issues. Andrew Yang's central refrain around universal basic income (UBI) struck a nerve for many. At no other point in my lifetime can I recall such fervor around UBI. What’s fascinating is that Yang isn’t the first American politician to have raised the issue.

In fact, the one who came closest to making it a reality was President Richard Nixon. Surprised? I was. With the support of 1,200 economists, Nixon seemed destined to make his Family Assistance Program a reality. Were it not for an Ayn Rand admiring advisor and the Senate Democrats who believed the plan didn’t go far enough, we might have had an entirely different outcome. I highly recommend reading Bregman’s essay that details this forgotten episode of US history.

One can see why UBI or similar policies appeal to people across the political spectrum. Unconditional cash disbursements put choice in the hands of the poor. This allows them to determine how to best use their money. As Michael Faye from GiveDirectly says, “the real experts on what the poor need are the poor people themselves.” Taking less liberty in prescribing exactly what we deem the poor need seems to the right approach.

Today’s welfare programs “with reams of paperwork, registration systems, and an army of inspectors” as Bregman puts it, are inefficient. They also fail in allowing the poor to exercise their own judgement on how to spend their resources.

In Stockton, California, 120 residents earning less than the city’s median income received $500 per month over the last year. Given the positive outcomes, this experiment was recently extended for another six months. During the first twelve months, researchers learned that 40% of money went to food. Another 20% went to big box stores like Walmart and Target. Not exactly frivolous purchases.

The data also confirmed that people with the least money seem to budget it best. There just isn’t much credence to the notion that we cannot trust the poor with money. To see precisely how intricate their budgeting can get, read Portfolios of the Poor, which explains exactly how people around the world get by on less than $2 per day. It's no surprise that a recent study by the World Bank showed that in 82% of cases in Africa, Latin America, and Asia, alcohol and tobacco consumption actually declined.

In study after study cited by Bregman, UBI leads to positive impacts for the payment recipients around the world. These impacts include: increased employment, increased income, and increased homeownership, among others.

UBI also leads to a decrease in the cost of attacking poverty. Now there’s a reason for everyone to pay attention — even the most cynical amongst us. Studies show that administering UBI requires fewer bureaucrats compared to existing programs with similar aims. It also requires fewer processes. Studies even show an increase in tax revenues too as recipients get on their feet and make more direct contributions to society.

I'm glad Bregman considers UBI as a tool for international development too. He asks:

“Why send over expensive white folks in SUVs when we can simply hand over their salaries to the poor? Especially when this also takes sticky civil service fingers out of the equation.”

Though I don’t know his thoughts on UBI, I recommend the work of economist William Easterly for more on the ineffectiveness of foreign aid. Especially his book, White Man’s Burden. In it, he argues that foreign aid cannot solve the issues of poverty in the developing world with just the right experts and just the right budgets. As Bregman shows, state administered UBI programs could be more impactful instead.

There are many, many fascinating analyses on this topic. Start here:

Tech has allowed me to build a great living for myself. However, the conversation around UBI is a clear reminder that our welfare state is still broken for far too many of our fellow citizens. Especially when one considers how wealth is concentrated in the United States.

Do I think UBI is a silver bullet that can cure poverty and inequality once and for all? I don’t. But I do think it’s a massive step in the right direction.

I'll close with a poignant quote from economist Joseph Hanlon:

"Poverty is fundamentally about a lack of cash. It’s not about stupidity. You can’t pull yourself up by your bootstraps if you have no boots.”