The Well and The World 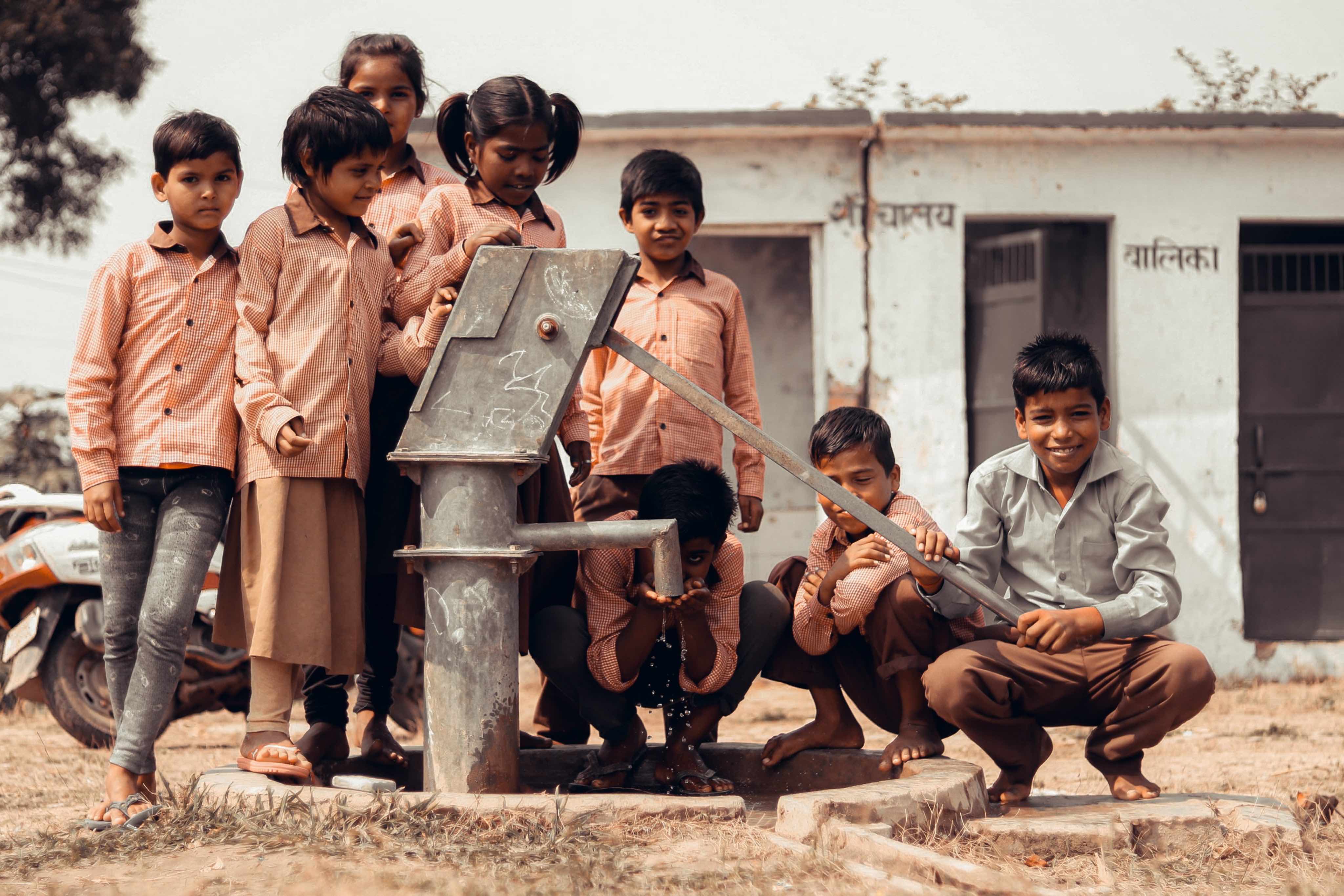 Originally published in Prospect Journal of International Affairs at University of California, San Diego in February 2009.

As sand softly sprinted across my face and hair, I stared out of the entryway, pondering my disposition: an Indian-American volunteer traveling through Rajasthan among a predominantly European group of fellow volunteers. I shared nearly all their feelings – mainly a blend of excitement, anxiety, and frustration – which were typical of first time explorers of this vast subcontinent. However, I was no foreigner to this land, and could thus understand the feelings voiced by employees of the NGO and the villagers we were about to meet just outside of Jaisalmer.

Having attended boarding school in Coimbatore for four years, I had seen a great deal of both north and south India through school trips and vacations spent with friends in India. Furthermore, I had also visited and traveled with relatives in Gujarat numerous times before attending boarding school between fifth and eighth grade. While in boarding school, I discovered and began to comprehend two distinct parts to my identity.

Whenever I would hear anything that somehow belittled the United States, such as accusations of the melting pot being nothing more than a nation of materialistic cultureless people, I felt anger and frustration. In addition, while in the United States, I would be deeply offended if I had to hear equally ignorant statements or false accusations against India or Indians.

This dual-defense mindset helped me place myself as an individual born into a family that could reap the benefits of two very different and infinitely fascinating cultures. Having the likes of both Twain and Tagore on the same shelf impacted me in numerous ways. As I developed a greater affinity for India, I naturally had to come back to see it and experience it as an older, more mature individual.

Having been accepted into the University of California, San Diego for winter quarter, I decided to take advantage of my extended summer vacation. Always a proponent of the “gap year” concept popular in Europe, I decided to take a “gap term” abroad not to study, but to simply volunteer and travel. After finding an agency to work with and making travel arrangements, I found myself reading travelogues and browsing the Internet for pictures of the famed Rajasthan.

The more I read, the more impatient I became. Arriving in New Delhi, I immediately felt the complete sensory shock that one is sure to experience when entering any port of this most lively of nations. After making a few phone calls, two representatives from the NGO I would work for arrived to drive me to a hotel in Delhi, where I would spend a night before our transfer to Jaipur.

Gazing out at congested New Delhi from inside a Tata Sumo sport utility vehicle, I was handed a list of names, ages, and home countries of the other volunteers who were arriving later in the day. I immediately started dreaming up personalities for everyone on the list, most of whom I would meet the next day.

Waking up early the next morning, I quickly got ready for breakfast before our bus ride to Jaipur. Hearing some German and an English accent from a corner in the dining area, I trusted my impulse and approached the group to inquire if they too were heading to Jaipur soon with the same NGO. Receiving nods and positive remarks around the table, I quickly introduced myself and learned that I was the youngest one in the group.

With what little time was left for breakfast, I learned more about my fourteen fellow German, Swiss, and English volunteers, who were mainly in their twenties and of diverse educational and socio-economic backgrounds. Taking our conversations from the breakfast table to the lobby, we began placing our luggage into two vehicles that would transport us to a bus station where most of us would catch a bus to Jaipur. Four of us volunteers spent the 165-mile trip in one of the NGO’s cars, watching the land become drier along the arid terrain.

With populated and green New Delhi behind us, we all looked forward to what Jaipur, the textile capital of India had to offer. After arriving in the Pink City, we were taken directly to the headquarters of the NGO, where we met some of the staff members and were oriented to our immediate surroundings. During that week, we lived with different host families that exposed us to a lifestyle that seemed typical of an upper-middle class family in India.

While in the colorful capital of Rajasthan, we explored many of the attractions, such as the city palace, Amber Fort and bazaars frequented by both Indian and international tourists alike. Jaipur proved to be a pleasant detour before our 15-hour train journey to Jaisalmer.

Beginning late at night at the grimy Jaipur train station, our ride across the 354 parched miles from Jaipur to Jaisalmer carried us deeper and deeper into the heart of the deserts of Rajasthan. The intense heat of the October sun coupled with scorched terrain made the journey seem endless, though playing games and learning more about the each of the other volunteers and three staff members helped pass time.

Entering the Golden City’s railway station, we were all exhausted and dirty, with sand in our clothing and luggage. However, we were all excited to meet more staff members from the NGO and finally see the camp we would live in for the next two months. As we made way towards our rural campsite fifteen kilometers away from the heart of Jaisalmer, I was immediately stunned by what seemed to be an overbearing sand castle planted in the middle of the town. Jaisalmer’s living fort and the bazaar around it soon became a destination we regularly visited for supplies or a special meal at one of the local restaurants that served a diverse array of entrées.

Our campsite was situated in a small village surrounded by sparse, dry vegetation. After receiving a brief tour of the dining hall, office, recreation room, and twelve huts, we met volunteers from a previous group who had already been living and working here for a month. The NGO employed a system of overlapping months between the start and end dates for each group so that once placed into a school or daycare center, one could receive guidance from members of a previous group.

After unpacking into our huts, showering, and having dinner, we were told that we were to tour the four schools and daycare centers the next day. Members from the newer group, which I was a part of, mingled more with the members of the older group to hear about their experiences thus far in various villages. Hearing multiple opinions, none of us could have known what were to experience the next day.

Driving from school to school, I began to notice strong similarities. Each school in the four villages we were to choose from was nothing more than one or two concrete structures, seemingly built in an ad-hoc fashion, housing a number of classrooms and perhaps a daycare center. Some of these classrooms had stains from the juice and saliva mixture that is a product of chewing beetle nuts. Though their classrooms were dusty and lacking in many facilities that most of us took for granted, the children at each school showed a great deal of enthusiasm.

That evening, I decided I wanted to teach English and mathematics rather than work in daycare. I immediately met with my teaching partner to learn more about the school I had chosen and to make a lesson plan designed to gauge how much each child already knew.

Driven to the village with the rest of the group, I approached the classroom I was to work in and saw around thirty children and their two teachers gathered inside to meet the new group of volunteers. After we were acquainted with the teachers and children, we dispersed into the various class distinctions, which were an arbitrary distinction that neither grouped by age nor ability.

On my way to my classroom, two children approached me and in a mixture of Hindi and Marvadi, politely asked me why I was carrying a water bottle when they had a well from which I could quench my thirst. Responding back in Hindi, I tried to explain that my stomach was not yet used to Indian water and that it was much safer for me, just like the other volunteers, to drink bottled water.

Immediately in disbelief, both children told me that the reason I would not drink their water was because I was a Hindu and that they were Muslim. Neither child could have been more than eight years old.

To this day, no experience has been a more powerful reminder of the impacts of dogma than my encounter with those children.